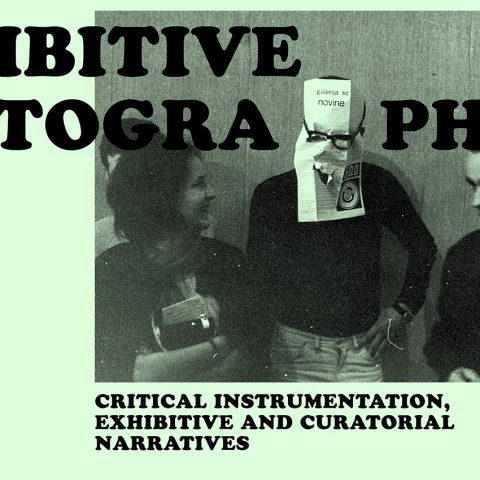 We cordially invite you to participate in the conference “EXHIBITIVE CARTOGRAPHIES” with the subtitle “Critical Instrumentation, exhibitive and curatorial narratives,” an international expert scientific and arts conference conducted in English and Croatian, and co-organised by the Faculty of Humanities and Social Sciences of the University of Split and the Croatian Section of the International Association of Art Critics (HS AICA) from 10 to 12 March 2022. The Conference will be held online on the Google Meet platform, in English and in Croatian.

The Conference will be referring to the workshop “Writing on Contemporary Art,” within which James Elkins – art historian and art critic, Professor in art history, theory and critique at the School of the Art Institute of Chicago – will hold a public lecture on 20 January 2022. Alongside Split, the workshop will also be held in Rijeka, in collaboration with the Museum od Modern and Contemporary Art (MMSU) – Ksenija Orelj, Branka Benčić, and Sabina Salamon – and in Zagreb, in collaboration with the Tomislav Gotovac Institute, Institute for Contemporary Art, and Nova Gallery. The workshop will be led by Silva Kalčić, Ivana Meštrov, and Ksenija Orelj; parts-days of the workshop will be led by David Maljković, Ana Kovačić, and Lea Vene; lectures at the workshop and/or Conference will be held by Janka Vukmir and Tomislav Pavelić, Darko Šimičić and Niko Mihaljević.

The aim of this conference is to present, process and contextualise more comprehensively the curatorial practice in contemporary art for the first time in Croatian art history. It is important to note that the history of curatorial practices is an area that has been relatively poorly studied in the Croatian art-historical context, while it is becoming increasingly present at the international level. With this Conference, our very objective is to address this important subject at the crossroads of art critique, theory, and practice. The interest in exhibition history and contextualisation of curatorial practices is becoming increasingly pronounced in art-historical research. While we can follow exhibition history in the modern sense of the universal right to publicness from the revolutionary turmoil of the late 18th century, the history of exhibitive practices gained a new dimension by the very avantgarde artistic strides from the late 19th and the early 20th centuries, which paved the way to methods of innovativeness, participation, and to questioning of existing institutional policies, contextual frameworks, and models of presentation. The emergence of the neo-avantgarde and of the institutional critique of the 1950s and 1960s destabilised the settled meanings and the institutional positions of artists, artworks, curators and the audience, which led to a more active role of the curator in mediating new artistic expressions, but also to a radical questioning of own position. Curators increasingly actively participate in the creation of meaning, and assume more and more often with their gestures or texts the role of meta-artists, especially in the domain of conceptual art. The redefinition of the position of the curator-author has become increasingly topical since the emergence of conceptual/neo-avantgarde currents in art.

The starting point of the Conference is the curatorial figure of Želimir Koščević, the laureate of the Annual Reward of HS AICA for 2018 and of the Lifetime Achievement Award. Irradiated by late modernism, but also by counterculture in the territory of the former republic, as a relatively young art historian, Želimir Koščević attended a fellowship at Moderna Museet, Stockholm’s museum institution, where he assisted – in 1969, the period of radical social progress – the then Director of said institution, Pontus Hultén, in the organisation of the legendary exhibition “Poetry Must Be Made by All! Transform the World!” which exhibited gestures and stances in lieu of material artworks, thereby opening up exhibition space not only for the then early conceptual practice, but also for radically political stances by encouraging the supporters of Black Panthers to gather within the exhibition. The echo of the avantgarde networking of life and art and the stance on art as the transformative motor of the social and political perception, present in Pontus Hultén’s practice, would go on to motivate Koščević for a more experimental and daring approach to exhibition curating, but also for questioning of the very exhibition format, which he continued to foster in his early curatorial beginnings following the return to Zagreb. This refiguration of Koščević’s activity (and ‘student practice’) preceded his return to Zagreb, which coincides with the programmatic openness and the generational artistic experimentation at the Student Centre in Zagreb, where Koščević worked between 1966 and 1979 as Head of SC Gallery. In this period, he introduced a series of innovations in its programme. Some of the innovations in Koščević’s early curatorial approach include the exhibitions Imaginary Museum, Exhibition of Women and Men, Hit Parade, Postal Consignment, Action Total, which were held outside and within SC Gallery. They foster experimentality and provide space to young artists; they open up towards international exchange of ideas, interdisciplinarity, egress from the Gallery, and democratisation of art. The Gallery Newspaper was also published, with the aim of self-contextualisation.

The Conference has been conceived as the final part of the workshop “Writing on Contemporary Art,” focused on the analysis of the role of curator, whether it be institutional or non-institutional. The role of contemporary art curator has been radically enhanced in the art world in the last few decades, and we could say that the curatorial figure – whether it proceeds institutionally, or is marked by independent non-institutional work – is an inseparable segment of perceiving the contemporary artistic worldview. The main coordinates of this workshop are the initiation of the perception of the role of curator and curatorial collectives when forming relevant knowledge on the contemporary culturological complex, i.e., the problematisation of the role of museums and galleries in contemporary society. By processing an exhibition event or the display setup of a particular collection, we perceive in it the politics of choice (purchasing policies, exhibition selections). Furthermore, we also perceive as to how the curators – with their critical and theoretical texts, but also with their practice – also shape the history of contemporary art and anticipate/create future tendencies, but also how the artists assume the curatorial position at a museum, thereby applying artistic methods – in lieu of linear museological narratives – such as the use of the setup and of the existing artefacts as materials, the toying with the ways of seeing and with the exhibition as a rounded experience.

Instructions to authors: We ask you to propose the topics as abstracts, not exceeding 5400 characters with spaces, no later than 28 February 2022. The lecture may not exceed 30 minutes. Lecturers who want to publish their texts in the “Exhibitive Cartographies” Proceedings should submit integral texts (27000 to 45000 characters with spaces, with a CV not exceeding 1800 characters with spaces) to the email address skalcic@ffst.hr until 15 June 2022. The texts will be reviewed and evaluated by peer reviewers. The submissions are accepted in Croatian and/or English. The formatting of the text/paper should be in accordance with the Chicago Manual of Style, found at the following link: https://www.chicagomanualofstyle.org/home.html, as a system of notes (Notes and Bibliography). 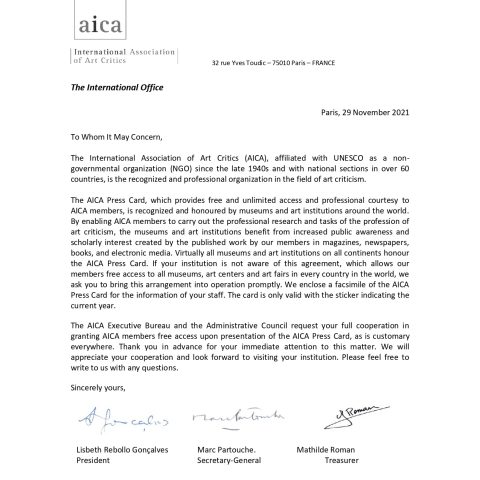 
By enabling AICA members to carry out the professional research and tasks of the profession of
art criticism, the museums and art institutions benefit from increased public awareness and
scholarly interest created by the published work by our members in magazines, newspapers,
books, and electronic media. Virtually all museums and art institutions on all continents honour
the AICA Press Card.

Writing about the Contemporary Art